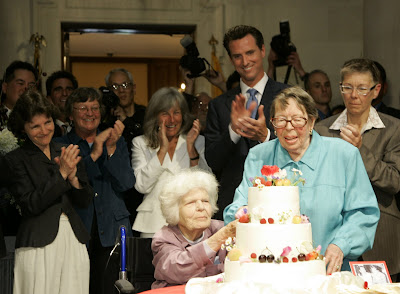 After a long legal battle, gay and lesbian couples in were legally allowed to marry as of 5:01pm on Monday June 16.

Del Martin (pictured, left) and Phyllis Lyon, who have been together for 50 years, became the first couple to wed; and were married by San Francisco Mayor Gavin Newsom (standing behind them) at City Hall.

Martin and Lyon were co-founders of the first major lesbian organisation in the , the Daughters of Bilitis, in 1955. The couple have a long and proud history of fighting for women’s rights.

Of course, not everyone is happy about this, as the following media release from the Westboro Baptist Church makes abundantly clear: 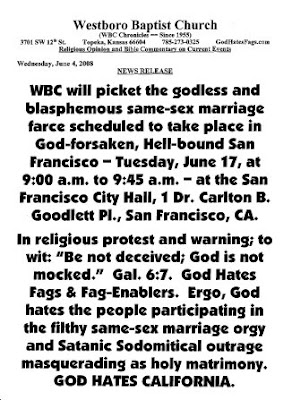 You know, somehow I kinda think they've forgotten that bit in the Bible about 'God is love'...
Posted by richardwatts at 12:54 pm

The Westboro guys are well know for being the crazy of the crazy, so I'm not sure why they are getting publicity (they are best ignored).

Not to be ignored though is the issue in Australia -- it's disappointing that our politicians on both sides of politics (conservative, or more conservative) dismiss this issue even though the number of people it potentially effects is so large and that it seems inevitable given demographic trends (i.e., most young people think its fine). Some party should take credit for being the first to do it.

Actually Conrad, I think the Westboro crazies SHOULD be given publicity: I think they encourage people who are unsure of which side of the fence they're on to want to disassociate themselves for the anti-same-sex marriage brigade.

As to when we get same-sex marriage in Australia - it's only a matter of time...

Those Westboro people sure seem to be revelling in all that hate.

50 years? But are they really ready for the commitment of marriage?

Seriously, it's sweet that it those two were first, even though my inner cynic wonders if somebody clever engineered it - great publicity.

Caoin - of course it was engineered; this is an age of spin after all, but of course you already know than, you Devil's Advocate, you.

Del and Phyllis were the first couple to be wed in California a couple of years ago, in the brief month before the courts cracked down on Mayor Newsom's deliberate act of civil disobedience. But for me, that matters less than their enduring love for each other, which has outlasted decades of bigotry.

Love prevails, it seems: a message which puts my inner cynic to shame.

I'm happy this couple was brought to worldwide attention. Imagine how paranoid and secretive they must have been to set up a gay organisation in 1955. Good for them.